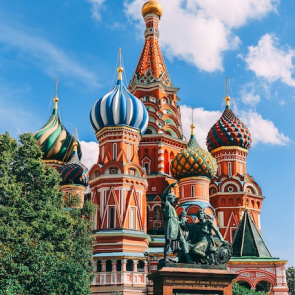 Full name: Russian Federation (the largest country in the world)

The capital of the country: Moscow (the largest city in Russia)

Tradition says the Viking Rurik came to Russia in 862 and founded the first Russian dynasty in Novgorod. The various tribes were united by the spread of Christianity in the 10th and 11th centuries; Vladimir “the Saint” was converted in 988. During the 11th century, the grand dukes of Kiev held such centralizing power as existed. In 1240, Kiev was destroyed by the Mongols, and the Russian territory was split into numerous smaller dukedoms.

In the late 15th century, Duke Ivan III acquired Novgorod and Tver and threw off the Mongol yoke. Ivan IV—the Terrible (1533–1584), first Muscovite czar—is considered to have founded the Russian state. He crushed the power of rival princes and boyars (great landowners), but Russia remained largely medieval until the reign of Peter the Great (1689–1725), grandson of the first Romanov czar, Michael (1613–1645). Peter made extensive reforms aimed at westernization and, through his defeat of Charles XII of Sweden at the Battle of Poltava in 1709, he extended Russia’s boundaries to the west. Catherine the Great (1762–1796) continued Peter’s westernization program and also expanded Russian territory, acquiring the Crimea, Ukraine, and part of Poland. During the reign of Alexander I (1801–1825), Napoléon’s attempt to subdue Russia was defeated (1812–1813), and new territory was gained, including Finland (1809) and Bessarabia (1812). Alexander originated the Holy Alliance, which for a time crushed Europe’s rising liberal movement.

Alexander II (1855–1881) pushed Russia’s borders to the Pacific and into central Asia. Serfdom was abolished in 1861, but heavy restrictions were imposed on the emancipated class.

World War I demonstrated czarist corruption and inefficiency, and only patriotism held the poorly equipped army together for a time. Disorders broke out in Petrograd (renamed Leningrad and now St. Petersburg) in March 1917, and defection of the Petrograd garrison launched the revolution. Nicholas II was forced to abdicate on March 15, 1917, and he and his family were killed by revolutionaries on July 16, 1918. A provisional government under the successive prime ministerships of Prince Lvov and a moderate, Alexander Kerensky, lost ground to the radical, or Bolshevik, wing of the Socialist Democratic Labor Party. On Nov. 7, 1917, the Bolshevik Revolution, engineered by Vladimir Lenin and Leon Trotsky, overthrew the Kerensky government, and authority was vested in a Council of People’s Commissars, with Lenin as prime minister.

In 1991 Gorbachev signed the Independence of Soviet Socilaists republics.In June 1991, Boris Yeltsin became the first directly elected President in Russian history when he was elected President of the Russian Soviet Federative Socialist Republic, which became the independent Russian Federation in December of that year.On 31 December 1999, President Yeltsin unexpectedly resigned, handing the post to the recently appointed Prime Minister, Vladimir Putin, who then won the 2000 presidential election and is the President of the Russian Federation till nowdays.

How cold do you think Russia can get? 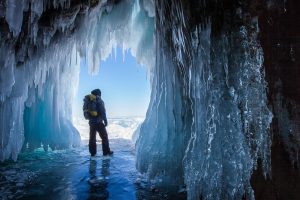 The Russian winter certainly guarantees plenty of snow and frost  but not everywhere. And of course it doesn’t last forever. Russia’s climate varies from the deep arctic chill of the far north to the searing desert heat of some inland areas further south. There are four seasons in the country. In the European part of Russia the first snow usually falls in late November and stays till early April. The average winter temperature is about -10°C, -15°C.

Down south, Russia’s vast steppe is hot and dry. Winters are short but cold. The Black Sea resort of Sochi makes up for the rest of the country with a 35°C between June and August – no wonder it is Russia’s top summer holiday spot.

On the other side of the Ural Mountains, Siberia – contrary to its popular image – isn’t the land of eternal ice. It does have a summer – actually quite a warm and pleasant one, with temperatures climbing to 20°C and higher. The weather is rather wet and winters are quite cold.

In the Far East, inland areas can get very hot with a tropical 40°C. Coastal regions are much cooler and wetter. Winter is normally milder than in Siberia. The port of Vladivostok sees a typical -13°C in January. And if you think that’s cold – stay away from the village of Oymyakon in north-eastern Siberia. With the lowest recorded temperature of -71.2°C, it’s the world’s coldest inhabited place. 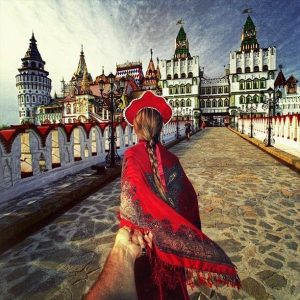 Russia has a long and rich cultural history, steeped in literature, ballet, painting and classical music. While outsiders may see the country as drab, Russia has a very visual cultural past, from its colorful folk costumes to its religious symbols. Here is a brief overview of Russian customs and traditions.

Russia is land of different cultures and nations.

Russian culture has a long history and can claim a long tradition of dividend in many aspects of the arts, especially when it comes to literature and philosophy, classical music and ballet, architecture and painting, cinema and animation, which all had considerable influence on world culture. The country also has a rich material culture and a tradition in technology.

Russian culture started from that of the East Slavs, with their pagan beliefs and specific way of life in the wooded areas of Eastern Europe. Early Russian culture was much influenced by neighbouring Finno-Ugric tribes and by nomadic, mainly Turkic, peoples of the Pontic steppe. In the late 1st millennium AD the Scandinavian Vikings, or Varangians, also took part in the forming of Russian identity and Kievan Rus’ state. Kievan Rus’ had accepted Orthodox Christianity from the Eastern Roman Empire in 988, and this largely defined the Russian culture of next millennium as the synthesis of Slavic and Byzantine cultures. After the fall of Constantinople in 1453, Russia remained the largest Orthodox nation in the world and claimed succession to the Byzantine legacy in the form of the Third Rome idea. At different points in its history, the country was also strongly influenced by the culture of Western Europe. Since Peter the Great’s reforms for two centuries Russian culture largely developed in the general context of European culture rather than pursuing its own unique ways. The situation changed in the 20th century, when the Communist ideology became a major factor in the culture of the Soviet Union, where Russia, or Russian SFSR, was the largest and leading part.

Nowadays, Russian cultural heritage is ranked seventh in the Nation Brands Index, based on interviews of some 20,000 people mainly from Western countries and the Far East. Due to the relatively late involvement of Russia in modern globalization and international tourism, many aspects of Russian culture, like Russian jokes and the Soviet Art, remain largely unknown to foreigners. 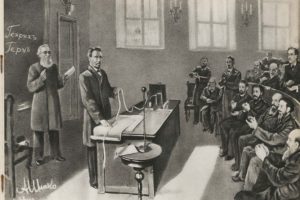 Russian science and technology are famous due to many achievements. On the top of the list there are: the invention of radio by A. Popov, the creation of the Periodical table of elements by D. Mendeleev, formulation of the principals of the interplanetary space flights on multistage rockets by K. Tsiolkovskiy, achievements of Russian space program lead by S. Korolev that include first unmanned space flight of “Sputnik” and first manned space flight of Yu. Gagarin, invention of laser by N. Basov and Yu. Prokhorov as well and many other discoveries.

The applied science and technology is mainly done in Institutions and Design Bureaus belonging to different Russian Ministers. They are involved in research and development in nuclear energy (Ministry of atomic energy), space exploration (Russian aviation and space agency), defense (Ministry of defense), telecommunications (Ministry of communications) and so on.

Russian Academy of Sciences is the community of the top ranking Russian scientists and principal coordinating body for basic research in natural and social sciences, technology and production in Russia. It is composed of more than 350 research institutions. Outstanding Russian scientists are elected to the Academy, where membership is of three types – academicians, corresponding members and foreign members. The Academy is also involved in post graduate training of students and in publicizing scientific achievements and knowledge. It maintains ties with many international scientific institutions and collaborates as well with foreign academies. The Academy’s divisions directed by its Presidium.

Founded in St. Petersburg in 1724 by Peter the Great the Academy was then opened in 1725 by his widow Catherine I, as the Academy of sciences and arts. Later known under various names it got its present name in 1925. In its early decades, foreign scholars notably the Swiss mathematicians Leonard Euler and Daniel Bernoulli worked in the Academy. The first Russian member in the Academy was Mikhail Lomonosov, scientist and poet, who was elected in 1742 and contributed extensively to many branches of science. The Academy’s highest prize, the Lomonosov Medal, bears his name.

Under the tsars, Academy was headed by the Court members and controlled a relatively small number of institutions. After 1917 the Academy started to elect its president and expanded its activities while many new scientific institutions arose throughout the Soviet Union. By 1934, when it was transferred from Leningrad (now St. Petersburg) to Moscow, it embraced 25 institutes. Before the disintegration of the Soviet Union in 1991 the Academy directed more than 260 institutions including laboratories, naval institutes, observatories, research stations, scientific societies and branches, that were spread throughout the republics of former Soviet Union. Russian Academy is proud of it’s members awarded with the Nobel prize, who are: Ivan Pavlov, Nikolai Semenov, Igor Tamm, Pavel Cherenkov, Ilya Frank, Lev Landau, Nikolai Basov, Alexander Prokhorov, Mikhail Sholokhov, Alexander Solzhenitsyn, Leonid Kantorovich, Andrey Sakharov, Pyotr Kapitsa, Zhorez Alfyorov.

Russian Academy of Sciences celebrated its 275 jubilee a few years ago. Still it is the leading force of the Russian science keeping its best traditions, thus maintaining a high level of the scientific, technological, educational and spiritual potential of the country.